Ok not posted in a while, busy busy busy!!! Few updates for the site 🙂

These have been brilliant!!! With 2 minor issues, the first set of leds I bought on ebay where pretty cheap, and as such a few of the leds died, wasn’t terrible but having decided that the project was good I decided to find some better ones and replace them. 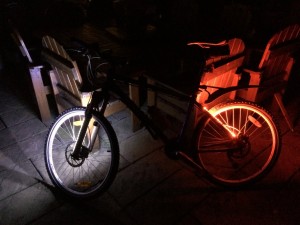 As can be seen, these are not flashing for the picture, and I wouldn’t use these as an only source of light, however as an “Awareness” light (Great for miserable mornings as well) they seem to work very well, and general reaction has been very positive from other bike commuters through to young kids who think they look “Sick”.

The second issue I had was with the battery… I made the silly mistake of charging with a 12v charger forgetting that the battery had no cut out in it (In the charger that came with it) and manage to destroy the battery! So New LEds and New battery, but without them now I feel naked and very unprotected 🙁

I never ride at night without standard lights on the bike, these are for me just get seen by driver lights 🙂

Well that project was fun but an 8 x 8 grid was just not enough. I did enjoy playing with Node JS on the Raspberry PI and even wrote a small DMX interpreter to run with Glediator 🙂 worked really well, but too small to be effective. So next job is to make Pixel Grid 2 this is a new grid based on 15×15 (New leds and left over of last leds). 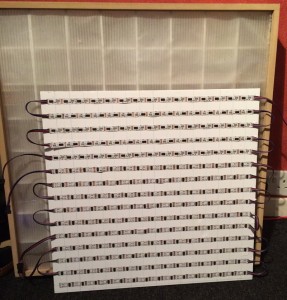 As you can see the new board is smaller than the first, so a much higher pixel density. Instead of soldering each one with a cable they have been left in standard format, the downside is that the second lot of leds I bought are slightly different to the first lot. Brightness, RGB byte order! and fractionally different spacing of the leds. Most of these can be resolved without that much work, but it draws a lot more power so I need a better power supply before I can do more with this. Also thinking about the best way to create the grid itself, may explore using balsa wood for this!

My aquarium has been running for a number of years, but for the last few of months I’ve always had issues with the connectors on one of the tubes (2 x 36″) and I can’t find any spares, and no mater what I did I couldn’t get a reliable connection on that bulb. I’m not a fan of 240v and water, never have been so decided it was time to play with some leds. Official Led lighting for aquariums is quite expensive, but I’m sure there is a lot more science behind it etc. however I just needed good light as the single bulb I had wasn’t enough. Looking at what I could get on ebay I went for 5m of cool white 5630leds and 6amp psu to power them. I had an old piece of white PVC that was just about the right length and did a quick experiment.

Pretty simple setup, and just had them lying on the two bits of glass that brace my tank (as you can see above).

Pretty bright when on, and when facing down

Not bad – could be better and I think I might experiment with some other leds to add on, but I want to monitor the plants to see how they react to the new lighting. Total cost so far on this setup £15.99 🙂 what would be really nice would be to add a controller in to bring the light up in brightness and down slowly, and possibly add additional colours to create phases (maybe blue for night etc.)… all down to time!

I think that bout wraps up my leds update 🙂