A few weeks ago I saw on eBay an Ikea Daft Punk coffee table (Google search it) which blew me away as awesome, probably the geek in me! These are listed on eBay from £3000+ a bit out of my price range, but I wanted to take the idea and do something more with it. After a bit of research, it seems I’m not alone!

Having done some research, I decided on the Raspberry Pi (Bought 10 days before the new one was released, grrrr!) and 5m of WS2801 RGB leds (in a strip, probably wrong choice in hindsight however lets move on!). I also bought some foam board, and 4 core flat wires, and so far have my grid fully working.

Next job is to build the frame, and find the best front cover to diffuse the light so it looks better. Once that’s done I can look at starting to program it up with my own stuff 🙂 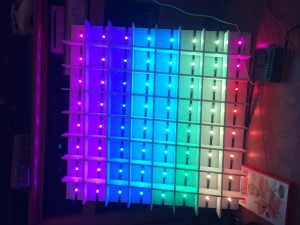